I was raised to be polite and “proper,” from table manners to how I answered the phone to just about everything else you can imagine. I think that my mother figured that, even if we didn’t have a lot of money, she could instill habits in me that would make it easier for me to adapt to various social settings. She went so far as to read Miss Manners to my sister and me after dinner. Not just the newspaper column, but the book.

Not this one. She probably kept it hidden from us, where most parents would hide a bottle of gin.

This one, which will make you want to drink a bottle of gin.

She also had a habit of saying things like, “Cynthia, it’s ‘whhhhhhhere,’ not ‘wear,’ and ‘whhhhhhhhhen,’ not ‘wen.'” “Yes, I realize we’re at McDonald’s, but your napkin still belongs in your lap.” (We didn’t eat out very often. To this day, my napkin is *always* in my lap, even when I’m eating alone at home.) And my personal favorite, “Nice young ladies don’t [fill-in-the-blank-with-whatever-improper-thing-I-was-doing-at-the-moment].”

That last one was something of a mantra in our house. We heard it a lot. In one particularly frustrated moment, I exploded in response: “I’m not a nice young lady!!!!!!! I’m just a little girl!!!!!!!” Mom managed not to laugh, probably because she had been waiting for that moment ever since my toddler-hood obsession with the nursery rhyme “The Girl with the Curl.” (“When she was good, she was very good, but when she was bad she was naughty!”)

As I grew older, I danced a delicate balance between propriety and rebelliousness. If the etiquette rule made sense, I followed it…unless it was too much trouble, or I was feeling particularly rebellious. In adulthood I took to saying things like, “My mother would not approve” when I did something particularly shocking.

Most recently, I blatantly stuck out my tongue and licked a strawberry at a benefit dinner after an older (and very proper) man informed me that he had wanted that particular berry off the dessert tray. I think it was the first time everyone at the table had really exhaled all evening.

But even when I didn’t follow “the rules,” it was intentional. I consciously made the decision to go against my upbringing, and it always made me smile.

When Mom became ill, we entered into new etiquette territory. Miss Manners had never written about the polite way to put food down a feeding tube, or at least not to my knowledge. And even worse, she had no suggestions about how to handle what is referred to as “burping” a feeding tube.

Oh, how I loved doing this. It basically involved pouring a little water into the tube and pushing gently on Mom’s stomach so that excess gas could escape through the tube and into the air. This process generated all sorts of interesting sounds and sometimes even bubbles. If the burp was especially long, I’d compare her to Booger in Revenge of the Nerds.

As someone who had always been a bit envious of my sister’s ability to belch on command (her own special way of rebelling against Mom’s emphasis on etiquette), oh how I wished I could do this myself. Not exactly Miss Manners-worthy. Even on the rare occasion that I used crystal stemware to pour something down Mom’s tube (hey, it amused me, and I jumped on anything that would provide levity for our situation).

One of the things I loved most about Mom was her ability to make people relax in the midst of stressful situations. Ever since I could remember, she’d had this way of putting others at ease with her quiet, soothing voice and gentle smile. Somehow she managed to do that even in the midst of her disease, especially during the early days when she could still communicate easily. She would make a joke, display a gleam in her eye, or simply sit there in utter calmness while everyone else moved frantically about the room.

Her first birthday after her respiratory failure was a classic example of how she handled challenges with grace and, well, Southern charm. She was determined to continue eating by mouth, even if it was a tiny amount of food, or what speech therapists call “pleasure feedings.” This was incredibly important to her, but her first swallow test (when the speech therapist assessed her ability to swallow adequately without choking or other complications) did not go so well.

Mom was devastated because her pulmonologist had assured her that she should be able to eat for at least some time after getting the trach. Her speech was still really good at that point, but she didn’t understand how to swallow with an object inserted directly into her trachea that placed pressure on her esophagus. I spoke with the speech therapist and insisted on a second swallow test, and once Mom had practiced her new technique, she mastered it. After all, she was a lifelong musician, and she simply needed to practice. She continued to eat for quite some time after that initial mishap.

But no other occasion was as significant as that first “meal” with the trach. She was in a long-term rehabilitation hospital that year on her birthday, and all she wanted was some Blue Bell Ice Cream, made in the small Texas town that she had called home for three decades. Dutch chocolate, to be precise.

I offered to feed it to her, but she stubbornly insisted on eating it all by herself. On her birthday, she ate only a few bites. The next day, she ate an entire one of those mini-cups, just like the ones that had been served at just about every social function that I could recall in Brenham. 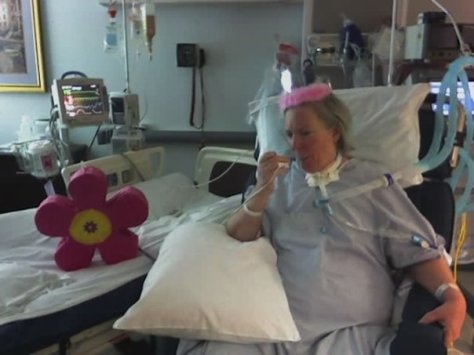 Mom eating ice cream on her birthday in 2007. She wasn’t particularly thrilled about the princess crown that I made her wear.

I don’t know how she did it. Her upper-body strength had started to deteriorate, and it took a lot of effort to lift the spoon to her mouth, even with a pillow for support. Somehow, she not only ate it unassisted, but she did so with such politeness that Miss Manners would have nodded.

Plenty of situations in the subsequent years threw Mom’s etiquette rules into a tailspin. Critical, terminal illnesses aren’t always dignified. I think it’s possible to preserve a sense of dignity, however, with the right mindset.

And ultimately, that’s what etiquette should be about: putting others at ease and helping us all to be a little more comfortable when we are feeling squirmy, squeamish, and awkward. That was one of Mom’s gifts to those who encountered her. Even in my most rebellious moments, I’ve tried to honor that spirit. I think that my mother would approve, in her own special way.